What’s the difference and which is right for you?

Our goal is that by 2023, we can all build applications. We work hard to make application development possible for everyone. "How can we make it easier" is the foundation of everything we do.

It’s a question we get frequently: which is better, no-code or low-code? And it’s understandable – the differences aren’t immediately clear and any sensible person or organization needs to know whether a new venture is right for them. We’ll do our best to compare the two for you on this page, but if you want more information about the individual technologies, you might want to check out these pages first:

Low code vs. no code

Similarities
Low code and no code share some common goals: to speed up software development, to lessen the risk of coding errors, and to increase agility. There are similarities, too, in the way these goals are achieved. Both technologies enable a visual way to build applications, utilizing visual integrated development platforms (IDEs). Both enable builders to drag-and-drop pre-coded blocks instead of continuously writing code from scratch. Basically, less coding = faster development.

Differences
That brings us to the differences between low code and no-code development. The clue is in the name – whereas low-code still requires some programming, no code doesn’t. That doesn’t mean that experienced developers aren’t needed with no-code software – they absolutely are – but instead of writing code, they’re there to provide governance and take care of complex tasks like security and scalability. Essentially, it comes down to the amount of code required and the amount of code developers want to write.

To see low code and no code examples in action, check out our App Gallery. There, you’ll see examples of enterprise applications across multiple industries, all built with the Betty Blocks platform.

The evolution of high-productivity toolsets

In the image below, you can clearly see the evolution of high-productivity toolsets like no code and low code. The image shows that low code doesn't offer the same speed as no code (because there is more programming involved) and subsequently how this impacts innovation. Betty Blocks is a citizen development platform. This means it can be used as both a low code or a no code platform depending on your organizations needs and goals. 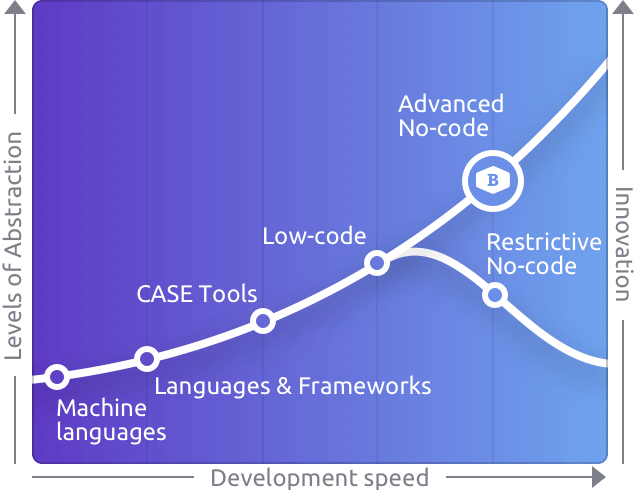 At a glance: Advantages of low code and no code

"Programming isn't about typing, it's about thinking"

Who builds with low code and no code?

If we compare who uses low code and no code, the main difference is that non-experienced developers will find it much more difficult, if not impossible, to begin using low-code platforms without training. Conversely, people without a background in programming can start using no-code platforms pretty much immediately.

In both cases, experienced developers are essential, but unlike low code, no-code platforms enable other types of developers to enter the software development process. These developers are called citizen developers.

Do I have the same freedom and flexibility compared to manually adding code?

Excellent question! Yes, with Betty Blocks you have. Low-code and no-code platforms have evolved rapidly. You can go as complex as you like, the easiest way possible. Don't just take our word for it, find out yourself in a personalized platform demonstration based on your business case.

What can I build with a no-code platform?

We created an App Gallery to answer this question. In the App Gallery we show you the possibilities of no-code and the unique features of each application. Take a look and see what’s in it for you and your organization!

Although it’s easier for non-experienced developers to begin using no-code platforms, both low code and no code support citizen development in the same fundamental way: they reduce the need for writing code. Using drag-and-drop functionality and pre-coded blocks, low-code and no-code tools lower the technical barrier to entry to application development.

This has a wide array of benefits including speeding up the development lifecycle, expanding the developer pool, bringing business insights into the development process, and ultimately enabling better solutions.

Why choose when you can have it all?

At Betty Blocks, we understand that every organization is different and that goals, strategies, and resources change over time. That’s why our platform can be used as either a low-code or a no-code platform. Betty Blocks is a citizen development platform first and foremost. It enables citizen developers, whether on the business side or in IT, to speed up the development process and build better solutions in a safe and governed environment.

Betty Blocks gives you the freedom to build advanced applications by using citizen development in the way that best suits your organization. Is your focus on enabling your experienced developers to build faster? Use Betty Blocks as a low-code platform. Or, does your IT department have a huge backlog whilst business-side employees are itching to solve problems? Use Betty Blocks as a no-code platform. And, of course, knowing how to use the platform effectively for your specific needs is something we’re here to help with.

Want to know more about citizen development? We recommend starting with our whitepaper: Getting Started With Citizen Development.