Microsoft and Betty Blocks Enter Strategic Partnership and Everybody Wins

At Betty Blocks, we were delighted when we found that Microsoft shared our vision. It was also a little surprising to find that a tech company on the scale of Microsoft are also aware of the increasing shortage of talent when it comes to developing software solutions.

Like Betty Blocks, Microsoft knows that the answer to this problem must lie in two areas: making software development faster and easier for IT professionals, and allowing business-side employees with less programming knowledge to take part in the development process.

Though the Betty Blocks platform was 100% cloud-based, we were aware that many leading cloud-dependent organizations require a more complex cloud infrastructure.

“In 2017, we were still in the process of building a web application on our platform,” says Chris Obdam, CEO at Betty Blocks.“ And we were working with a local cloud vendor, with which we’ve been working for over 10 years. But, for example, one of our clients in Japan needs its applications situated on our platform to be running all the time, 24/7.”

As an application development platform running as a software as a service (SaaS) solution, it was clearly imperative that Betty Blocks could facilitate this. Though the local cloud company was running the application servers and databases, it couldn’t be the strategic partner Betty Blocks was looking for.

“What we found out is that the [Azure] platform was really user-friendly, enough for customers to start using the platform at an advanced level, and fast. There really wasn't that much of a learning curve.”

Chris Obdam, CEO at Betty Blocks
And there was another concern: Betty Blocks was beginning to require a multi-cloud approach. While a public cloud was appropriate for small private companies, larger enterprises could be prevented by size, regulations, and security restrictions, from running on a public cloud.

After trying several platforms and vendors, we started to look at Microsoft Azure. It was clear immediately that Azure is a true cloud computing platform that works seamlessly and meets all of our technological requirements.

“We eventually decided to run with Azure, and framed the process to take three months,” explains Obdam. “We were able to take the client and the applications to the cloud after just one day, which was a little unexpected. And most of the whole migration in just a couple of weeks.”

Within a month, Betty Blocks was running entirely on Azure. This was no mean feat, considering Betty Blocks’ technology consists of two main parts, one written in Ruby and one in Elixir, with auxiliary services in Memcached, Redis, ClickHouse, InfluxDB, and RabbitMQ.

We wanted to make sure all of our customers were aware of the benefits of the new partnership. So, our no-code experts, assisted by Microsoft, began running what Chris calls “boot camps” or “pressure cooker” sessions within Betty Blocks. These sessions were run with the goal of extracting maximum value both during and after the migration.

Chris says: “Everybody was also really pleased with the ease of use of the platform in terms of finding their migrated content, and the completeness of the Azure back office as well. If you compare it to other platforms, Azure is a compiled set of acquired tools―and they combine well together. It’s just one set, that works. Everything was already there. With Azure, we could rise to the challenge of getting the platform and containers ready to run on Kubernetes than having to focus on initial configurations.”

The Microsoft Azure Kubernetes Service (AKS) was implemented to handle containerized applications in Kubernetes, and as AKS handles its own resource provisioning, it wasn’t necessary for Betty Blocks to use a third-party provisioning solution.

Beyond the improved end-user experience, Betty Blocks’ developers also saw instant benefits: “Having all those tools instantly at your disposal was very helpful,” says Chris. “If you work with DevOps and need to do some monitoring, you can fix yourself a virtual server and install some monitoring software on top of that. But with Azure, that monitoring service is already there. That means you can immediately start implementing best practice. That improves the whole setup of your cloud infrastructure as well because there’s less debate about what should be the way forward. You just make use of the service that’s already there, and there’s less responsibility, as it’s transferred to Azure.”

The Betty Blocks codebase remains a mix of Ruby on Rails and Elixir, with a steady move to Elixir across the board. Both Ruby and Elixir code is fully integrated with Azure.

Everyone's a winner — especially the customer

It wasn’t long before Betty Blocks’ customers were enjoying all the benefits we had worked carefully to identify during the migration. For customers, it really was like having their cake and eating it, too!

“The new Azure cloud that we offer is performing really well, so what customers have experienced is more stability, more speed, and more performance for their applications,” says Chris.

Betty Blocks and Microsoft Azure are now looking at increasing the customer experience further by capitalizing on the latest Azure features.

“We are working together with the Microsoft Azure platform to make it happen as well. With machine learning and AI, you can speed up the process by suggesting next steps. For example, if you’re making an app and complete one particular part, the AI might recognize that particular functionalities are used in other platforms. It would then suggest that you might want to use this functionality, as other platforms have added it, too,” says Chris.

“It takes you more effort to do things when you’re not on Azure. We can now do things faster and bring more value to our clients. It’s easier for us to bring our offering to an even more professional level.”

Chris Obdam, CEO at Betty Blocks
With Betty Blocks and Microsoft Azure in partnership, application development is simpler and more powerful than ever before — it brings us all one step closer to democratizing software development. 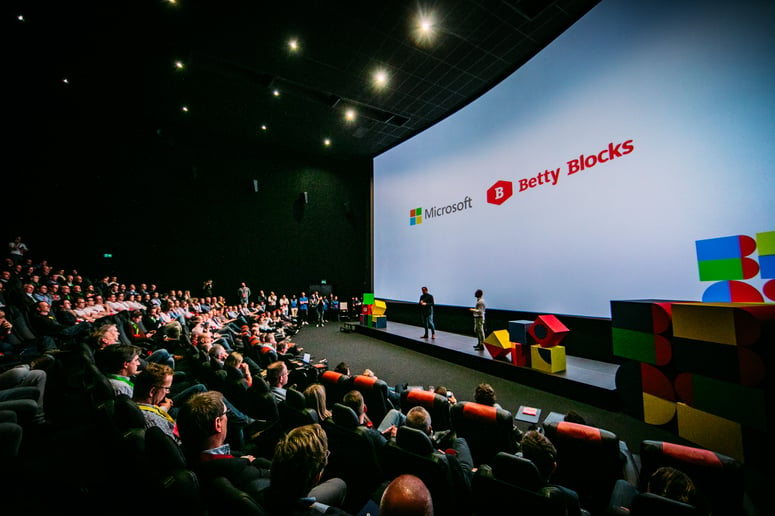